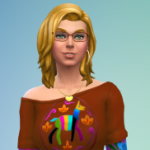 Loanet Posts: 3,852 Member
September 2021 edited September 2021 in The Sims 4 Game Feedback
We're all saying it. And that's the awful thing.

I know some people really hate Occults. That's okay. But they're being listened to in completely the wrong way. When an Occult first comes out, thatis the first time it arrives in the game, so of course you feel like you're getting a lot of visits from Vampires - they've never even visited before! And yes, visiting every other night is a bit much when it's impossible to wake up in time...

But Occult players are actually in the MAJORITY, from what I've seen. Even those who don't play Occult heavily would rather have the option. If we had perfect realism you would have to choose whether or not to wipe.

Thanks to a handful of really loud people, EA has convinced itself that nobody will buy Occult packs and Sims 4 - with its slightly cartoony style - should be more realistic, when what we want is more DEPTH. So our Occult states are really weak when we know that they could be really strong. Magic users never use Magic, and have very few spells, Vampires and Mermaids rarely visit outside their worlds.

Occults make life deeper too.
Post edited by EA_Cade on September 2021
Just because I bought most of the Packs at full price doesn't mean I don't know when I'm being ripped off, especially now that I can't buy Bundles.
26