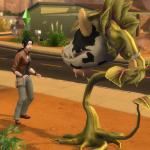 JustMeAlb Posts: 117 Member
May 11 in The Sims 4 General Discussion
Since getting Get Together I've seen townies randomly fighting each other and my sim. I've seen it happen once, maybe twice, during a night of game play but last night my sim was attacked four times. I only have the base game with Get Together and Jungle Adventure and was playing only one sim in the household which I almost always do. I play with autonomy off otherwise my sims would drive me freakin insane. I've googled this and read the old posts and didn't see any solution to this.

Been in a real loner mood so till last night my sim had done the Rags to Riches thing then been pretty much staying at home cranking out aspirations and skills and using the reward points to lock down his needs and pick up other improvements. Last night I got bored enough to venture out but opted to observe the townies from afar.

This is equal parts annoying and amusing. If anyone knows how to stop this autonomous fighting I welcome the solution, but I'm also curious about other's experiences with this.
The cake is a lie
0