White
Sign In · Register
Home› The Sims 2
January 21st- It's time for our Friday Highlights! You can check them out here!

What did you do with the university Sims? 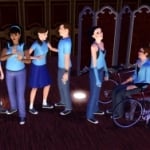 Erja888 Posts: 4,689 Member
March 2021 edited March 2021 in The Sims 2
Do you remember the Sims 2 University?
It came with some pre-made Sims who already attended university.
What did you do with all these Sims?

Here is my story:
Ashley graduated and bought a house in Bluewatervillage. He became a scientist. Later his girlfriend Brittany Upsnott moved in with him. She got a job as an artist. They got married.
After graduation Joshua Ruben bought the house next door. He became a sportsman. His girlfriend Tiffany Sampson moved in. She found a job as an architect. They got married and had a daughter, Johanna.
Kevin Beare graduated and bought a house in Bluewatervillage as well. He became a lawyer. His girlfriend Heather Huffington moved in after her graduation and became an actress.
Martin Ruben and Jane Stacks got engaged at university. Jane bought a house in Bluewatervillage and started a job in the paranormal career. Martin moved in after graduation, but he still is not sure what to do now... They haven't set a wedding date either.
Castor Nova graduated from uni and bought a two story house in Bluewatervillage. He remodeled the garden and put a pond in the backyard. He also worked on his creative skill and started to be interested in fishing. He also started to become interested in Nina Caliente. They had an affair which resulted in a daughter. Later his girlfriend Allegra moved in. They opened a store in Bluewatervillage to sell their crafts (paintings and pottery). They also have a daughter, Celeste.
Some years later Joshua and Tiffany Ruben tried for a second baby and ended up having twins, Jacob and Jennifer. Ashley and Brittany Pitts became their godfather rsp. godmother. They were never lucky when they tried for a baby, so they adopted a boy originally called Roland, but they changed his name to René. So far Ashley seems to enjoy his role as a dad while Brittany has not warmed up to the child (yet?).