White
Sign In · Register
Home› Discussion› The Sims 4 Speculation and Rumor
January 14th - It's time for our Friday Highlights! You can check them out here!

Since they have already started improving the traits... 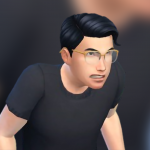 thatpinkcoconut Posts: 186 Member
March 2021 edited April 2021 in The Sims 4 Speculation and Rumor
...that could mean there would be no more new ones coming. The reason why they didn't care about fixing and improving them at first might be because they wanted to have them all released before the extensive overhaul.
Post edited by thatpinkcoconut on April 2021
1