White
Sign In · Register
Home› Discussion› The Sims 4 General Discussion
May 14 - It's time for our Friday Highlights! You can check them out here!
May 13: Today is patch day! 😃 To read the patch notes, click here!

Don't you find the introduction thing to be annoying at times? 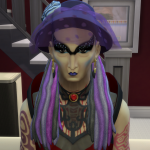 Nate_Whiplash1 Posts: 1,998 Member
September 2020 in The Sims 4 General Discussion
What I mean is that before you can say anything to another Sim, you have to do an introduction first--oftentimes, it wastes too much time.

Example; I'm running a club, and sometimes I'll have as many as 10 people lurking in the club after it closes--I want to send them home, but my Sim doesn't have hours to spend introducing himself to every Sim just to get them to leave.

I think some basic commands should be available without an introduction, wouldn't you agree?
9