Legacy simmers, how did your legacy family begin? 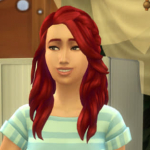 rottmeister Posts: 169 Member
May 13 edited May 13 in The Sims 4 Challenges, Stories and Legacies
I thought it might be fun to think back of the sims that started it all and the lives they (and their children) have lived.
I got pretty nostalgic seeing some of the earlier pictures of my legacy family.

Do feel free to post pictures and mention in which generation you currently are.

I'll try to look for some and I'll explain how it all started for me later, but for now I have to pay attention in online school >.>

Edit: posted my story in the comments
Post edited by rottmeister on May 13
5