Happy sims don't need to smile 100% all the time 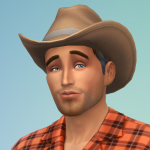 TOLKIEN Posts: 1,582 Member
January 2020 in The Sims 4 Game Feedback
Honestly I feel like all the emotions are too over the top, but as a story creator nothing is worse then having to deal with the "constant" joker smile sims walk around with all the time. Forget about story telling, its just creepy. Nobody smiles that much, smiling actually requires a lot of muscles and your face would literally start to hurt.

Regardless could you please make it so sims don't constantly smile or pout, or show exaggerated facial expressions ALL the time they feel said emotion. It should be more like off and on. More so if they smile occassionally while happy it would make them appear more natural, rather then walking around with this pasted on expression that looks like a mask.

Its like emotions cranked up facial expressions to 1000%. I get the game has a visual style but this constant smiling is just unnatural to see and annoying as a story teller to deal with.
33