White
Sign In · Register
Home › Discussion › The Sims 4 General Discussion
February 14 - It's Friday. What does that mean in The Sims forums? Time to highlight some awesim discussions!
February 14 - 3rd vote results for the Community Stuff Pack are ready! 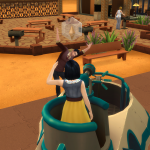 Gdurma Posts: 486 Member
December 2019 in The Sims 4 General Discussion
I've noticed a few things in my game are ridiculous now. Showering.... I can use a standalone shower, but if I shower while using a tub, my sims will never get clean. Kid to kid relationships are ridiculously slow. Way slower than normal. It's a SUBSTANTIAL decrease in relationship gains. My sim kid is a social butterfly and it's impossible to complete his aspiration. I mean, really ridiculously impossible. I can literally chat with another sim kid all day and only gain about 15-20% of the relationship meter. I've done this many times before, so I know it's not me. Also, building the fitness skill is EXTREMELY slow too! Oh my god, it took the entire WEEK for my sim to gain ONE level (from level 4-5) doing 2 jogs a day and trying to sneak in weightlifting too. I know it's not right and it's broken.

These are things that I've noticed in my game that I know for a fact are broken and wanted to report. Thanks.
1