White
Sign In · Register
Home› Discussion› The Sims 4 Packs Discussion
It's Patch day! The latest update is now live for The Sims 4 which includes critical updates to Gallery and in-game profanity filters. Click here to read the notes.

I think I kind of like it, she's not a vampire, but she's still immortal 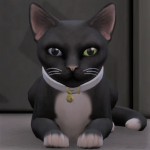 kati77 Posts: 3,146 Member
September 2019 in The Sims 4 Packs Discussion
First I was disappointed that you couldn't make a spellcaster vampire, and ended up making a human duplicate of my vampire, Alexandra, who I've been playing with since TS3, but now I kind of like how things turned out.

She's still powerful and immortal, and has lived about a thousand years. Except that she's not immortal because she's a vampire, but because she regularly makes and drinks the potion of rejuvenation. I think it's actually a kind of nice story. She could just grow old and die, but to stay a young adult forever, she just has to take care of getting the potion (of course she could still die of anything human sims can die of). I mean, who says spellcasters couldn't live forever with the help of magic?

Anyway, I'm loving this! Now two sisters have moved in with her, one of them is already a spellcaster, but does not know it yet, only suspects it, and the other one is still a human, and isn't really interested in becoming a spellcaster. But I think she'll end up being one, too, and then Alexandra can teach both of them.

Who else is playing with the immortality/rejuvenation theme? How are you doing it? Does anyone else have an ex-vampire as an "immortal" spellcaster?