Will we ever have drivable cars in TS4? 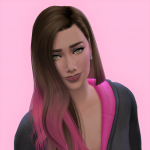 simskeleton Posts: 464 Member
September 2019 in The Sims 4 Speculation and Rumor
I would love to have this feature and I am surprised it hasn't happened yet. Do you think we will ever have drivable cars in The Sims 4? It needs to be in a patch. Are there any mods that truly make any cars drivable?

Check out my YOUTUBE CHANNEL, I make sims videos!
3