White
Sign In · Register
Home› Feedback› The Sims 4 Ideas Corner
July 27th - Bug Fixes! Catch up on the fixes with the latest patch click here
July 30th - It's time for our Friday Highlights! You can check them out here! 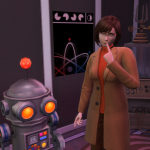 meowcatmeowkitty Posts: 85 Member
April 2019 in The Sims 4 Ideas Corner
The freelance careers we're getting with the upcoming patch look really cool, and I feel it's a system that could be a lot of fun if expanded to other skills. Here are some of my ideas, and feel free to share your own:
Freelance Photographer
You get gigs to take photos of specific things, which varies depending on the particular gig. Potential subjects (as with any of this list, feel free to mention any additions you'd like to make):
Sometimes they'll accept the photo immediately. Otherwise, you have to edit it on a computer or slablet to make them accept it.
Freelance Comedian
Your sim can write comedy routines or funny articles for paying customers, or be hired to perform at venues or parties. If they're only writing comedy acts, they can do all the work at home like in the other freelance careers. Doing the other kinds of gigs requires them to leave the lot and showcase their talents in public.

Write comedy routine/funny article: If these aren't accepted at first, you can edit them on a computer to improve them.

Performance gig: You might be hired to entertain at a party (on a sim's home lot or a venue), or just a venue. When you're there, there are goals to be met. You might be asked to get a certain number of sims in a playful mood, or tell a certain number of jokes, or make a certain number of sims laugh. If the household or venue has a microphone (or your sim brought one from home), you can be asked to perform comedy routines (if you have any) and tell jokes for certain amounts of time. Your pay and work performance depend on how well you meet those goals.
Freelance Guitarist/Pianist/Violinist/Singer/Pipe Organ Player/DJ
Similar to the Freelance Comedian career, your sim can either write songs for their chosen instrument for clients, or be hired to entertain at parties or venues. For most of these careers, if a lot lacks the instrument AND your sim doesn't have the necessary instrument in their inventory, your sim will not get gigs on that particular lot.

You'll get goals to play certain songs, get inspired, have a certain number of sims listening or dancing, and interact with others to get requests.

You can also be hired to serve food to people at parties or venues, with different goals appearing depending on what exactly the lot has.

Mixologist: Unless your sim has a portable bar in their inventory, they will never to asked to serve drinks on a lot that lacks a bar. Your sim will get goals to serve certain drinks to certain sims, give out bar snacks and socialize with party-goers/visitors.

Cook: Unless your sim has a portable grill in their inventory, they will never be asked to serve food on a lot that lacks either a grill, or a refrigerator. Your sim will get goals to make certain kinds of food (this can be random, or tied to the party type) as group plates and/or goals to make individual plates for pickier sims. You can also get goals to make non-specific dishes and have to talk to the people you're serving to see what they might like, or guess based on the kind of party.

Gourmet Cook: Your sim will never be asked to do gourmet cooking on a lot that lacks a refrigerator, a stove, or at least one counter space. Otherwise, it's a lot like normal cooking.

Baker: Similar to the Gourmet cook, except you'll also never be asked to serve cupcakes on a lot that lacks a cupcake machine.

If you're a freelance Gourmet cook, you can be asked to create Ambrosia for a sim for a hefty commission.
Freelance Herbalist
Sims have all sorts of problems, and they're turning to your herbalist sim to solve them. They'll pay the herbalist for remedies and expect a certain quality. This one doesn't have as much of an active component like the others I've mentioned do, but you get some fun flavor text and something for herbalist sims to do. Perhaps a reward for this career is a large terrarium that can be stocked with bugs and will randomly generate new bugs over time so an herbalist sim doesn't constantly have to go back to Granite Falls.
Freelance Vampire Lore Sim
That probably wouldn't be the name for this career, but "vampire hunter" doesn't quite fit since you can use this to help or hinder vampires depending on what options you pick. This is a fun one with a lot of options:
I build stuff and I'm always open for constructive criticism, so feel free to do that
11