What's the point of fire alarms? 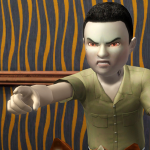 So pretty much a waste of simoleons and time playing for 2 sim days, since I obviously didn't save the game.
Note to self: save more often.