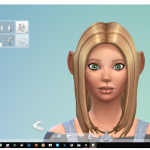 pookysimslover Posts: 332 Member
August 2018 in PC - Technical Discussions
I just went to play my game, and got the new patch from August 16th, now I can't get my game passed the opening, where it says The Sims 4! It goes passed it, but to a white screen and stays there! Or it minimizes into a little inch and half thing with just the minimizing thing, the enlarging one and the closing one, where sometimes it will be stuck, and you can't go back to full screen!