White
Sign In · Register
Home› Off Topic Chat
May 28 - It's time for our Friday Highlights! You can check them out here!
Sul sul Simmers! Join us for the #DreamHomeDecorator Livestream HERE today, May 25, @11 AM PT / 6 PM UTC! 🎉
May 27: Today is patch day! 😃 To read the patch notes, click here! 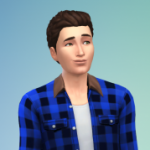 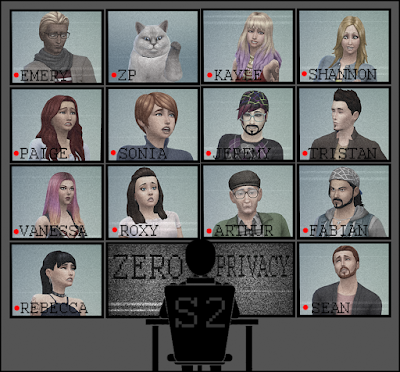 Welcome to Zero Privacy: Season 2!
An interactive reality gameshow made in the Sims 4, in the style of the North American version of the real gameshow Big Brother!


How The Show Works
The show is an interactive reality gameshow, which is like a story mixed with forum based / real life roleplaying. I act as the host of the show and create the story in the form of episodes, as well as set up the challenges, nominations and voting from the real life contestants. The contestants each submit a sim in which they would like to be in the show. If you win a challenge, your sim wins a challenge! If you vote for Bob, your sim will vote for Bob! When a real life player is eliminated, their sim is eliminated too. The forum game dictates the story!

How The Game Works
The game follows the Big Brother US style of game. Ten strangers will enter a house with no connection to the outside world, in hopes to be the last player standing to win 1,000,000 simoleons! Each week they will compete for power and by the end of the week there will be two nominees for eviction. One contestant will be evicted each week by a vote from the house until only one is left standing to take home the prize!

Head of Household (HoH)
The Head of Household, known also as the HoH, is the ultimate power won at the start of each week. The HoH will be decided by a challenge that the real life contestants will compete in. Once a HoH is crowned, the HoH will nominate two sims for eviction and is in charge of making any replacement nominees in the case that one of the two original nominees gets taken down via the PoP. The HoH will also cast the final verdict in the case of any tie breaker vote.

Power of Plumbob (PoP)
The Power of Plumbob, also known as the PoP, is the secondary power of the week. The PoP will be decided by a challenge that the real life contestants will compete in. The PoP will be played by the HoH, the two nominees and 3 other random contestants, totally to 6 players all up. The winner of the PoP can use their power to save one of the nominees from eviction. Alternatively, they can not use the PoP. Either way, the PoP winner is immune, as well as whoever they choose to use their power on (unless the PoP user is also a nominee, in which the winner is NOT automatically immune). The HoH will have to choose a replacement nominee if the PoP is used.

Secret Powers
This season, we've scrapped the Immunity Challenge from Season 1. This season secrets are hidden through the Zero Privacy House! These secret powers will only be revealed to those who find them. This season is full of secrets which may or may not affect how the game is played! When you find a secret, a power or punishment will come to you, to your sim or to those around you! Good luck!

Eviction
Each week, after the HoH and PoP competitions, two nominated sims will face eviction. Their fate rests in their fellow player's hands. All Non-Nominated contestants (except the HoH) will vote on who they want to leave the game. The highest voted nominee will be evicted from the house and eliminated from the competition. This will continue until the final 3 contestants are left.

The Jury
Once there are only two sims left, there will be a jury vote from ALL eliminated contestants on who they wish to be crowned the winner; The person who played the best game socially, strategically and competitively. The person with the most votes from the jury will win the $1,000,000 simoleon grand prize!

Diary Room Entries (DRE's)
The house will be fitted with a Diary Room in which you can speak in the eyes of your sims about the game, other players or about events in the house which will appear in the episodes of the show! These are stuff written by you to be shown in the episodes! Simply send an email to me, or a private message with what you'd like your sim to say in the Diary Room. You have free reign over what your sim says and does but please do not make them over the top, offensive to real life players or the show, or feature controlling or "god-modding" of other people's sims.