White
Sign In · Register
Home› Discussion› The Sims 4 Packs Discussion
January 21: Today is patch day! 😃 To read the patch notes, click here!
January 15 - Is everyone ready for the Friday Highlights? Check them out here.
Welcome to all new Simmers joining us over the holiday season! 🎉 Have fun on the forum and please make sure you check out the forum rules and
the rules about necroposting.

Stuff Packs Going Back To Only One New Gameplay Object? 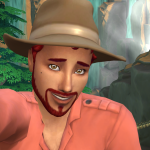 Callum2000 Posts: 792 Member
June 2017 edited June 2017 in The Sims 4 Packs Discussion
So the official trailer for the Fitness Stuff is out and there's only one new gameplay object again (the climbing wall) which to be honest, I was a little disappointed about. There is so much potential gameplay they could have included in a "fitness" pack. I know they don't have a large budget for SP's but in my opinion a climbing wall doesn't seem enough? The last SP also only had one new gameplay object and that pack actually ended up being my least favourite SP (I liked them all up until that point). I feel like the SP's are starting to go down hill again which is a shame because I think after Cook Kitchen they started to get really good.