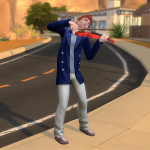 NoWayJose527 Posts: 1,456 Member
February 2016 edited February 2016 in The Sims 4 General Discussion
I hate having weddings in Sims 4 because they're always a disaster. Has anyone written a "Wedding Guide" that might help players like me? Here's the story of my latest fiasco.

Nicholas and Jeanne have been engaged for a while, and today was their wedding day. Jeanne will be moving in with Nicholas and his parents, so while playing Nicholas and his family -- they're the ones with the money -- he planned the wedding. Bride and groom. Check. Guests. Check. He invited 12 guests. Hire a bartender. Yep. Hire a caterer. OK. Hire a musician. Right. All looks good to this point.

The wedding is to be held at Magnolia Blossom park where many months ago I installed a bar, built a complete kitchen facility, and also put in a piano, so drinks, cake, and music should all be available. So far, so good.

Click to go to the wedding venue. The guests arrive, and I think I see Jeanne there. Thank goodness she's dressed in formal attire, but not a wedding dress. Nicholas decides to have a drink before the ceremony (trying to follow the little checklist) so he goes to the bar, but there's no bartender there. What happened to the guy he hired? Who knows. He hired another one, got a drink and thanked a couple guests for coming. (Another item on the check list.) All right, let's start this show. Click on the arch...huh? The only option available is "Fantasize about weddings." I hovered over the other options and learned that Jeanne was not there. Well, that's great. Had she left him at the altar?

No, there's no way that could happen. The text told me I needed to invite her to hangout at the current lot, but when Nicholas grabbed his cell phone, no such option was available. I tried clicking on the relationship panel but still had no option to call Jeanne or to invite her to her own wedding.

The only quick solution I could think of was to slip over to household management, add Jeanne to the household and have her travel to the park. When she arrived, of course, the "wedding" was no longer in progress. In order to get Nicholas and Jeanne married, I had to plan the wedding again, and once more hire everyone -- and spend all the money again. Good thing the groom's family has a healthy bank account.

Now, Jeanne changed into her wedding dress, and I steered Nicholas away from the bar. They exchanged their vows -- finally -- and I've got the pictures to prove it. (Just ignore the grumpy little girl in the scene. Let's pretend she was a flower girl who got tired of the long delay.) With the ceremony over, it was time for another item on the checklist -- sharing the first slice of wedding cake. BTW, at this point there were two bartenders who seemed to be confused over who was supposed to tend the bar, but fortunately I saw a baker in the kitchen and yes, there was a white cake on the counter. Well, what was I supposed to do next?

I tried to get Nicholas and Jeanne into the kitchen but only managed to get her there. She put a wedding topper on the cake to make it official, but when she took the first slice, she didn't get credit on the checklist. Time was running out. The cake was already cut, so what now? While I was looking around for Nicholas, the baker made a hamburger cake, and I struggled to get Nicholas into the kitchen. By that time, Jeanne had wandered off. Another wedding topper, Nicholas cut the cake, and this time it worked.

Next, we all moved toward the piano to enjoy a little music, but no musician ever showed up. Great. All the guests, including Jeanne and Nicholas, were playing a silent version of musical chairs while they chatted, and that's where I saved and exited. I was so frustrated by the entire wedding process I couldn't even enjoy it.

Is there such a thing as a Sims 4 Wedding Guide? If not, someone should write one.
13