How do you deal with this type of sim? 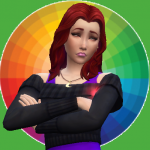 He is a very temperamental type of sim, either you love him or hate him, there is very little middle ground. Anyways, my sim fell for him, and they became romantically involved.

I'm not sure what happened, but he stopped showing up at work, they work at the Science building (in Go To Work). And eventually I stopped seeing him around my sim's neighborhood, he would usually be walking or jogging by. I was getting a little afraid that the game might cull him (yes I already know about the anti-culling mod over at MTS). So I had my sim invite him over, and when he showed up I had her ask him to move in with her. And it was when I discovered that he already romantically involved with 4 other sims, besides my sim, who asked him to move in with her. To make it even more, the guy has a great dislike for a great number of other sims as well.

I'm not so sure if I want this guy and my sim to end up together at the moment. Oh if you are wondering, he does not have any traits that would cause him to be so romantically minded, but he is mean. That's the other side of the coin with him, and I'm pretty sure that's why he dislikes so many sims, or they don't like him. He is close to making many enemies.

I don't really want to give up on him, but if I do decide that I get these two sims together, I do want him to be faithful. Other than killing him off, what would you do with this type of sim?
4