White
Sign In · Register
Home› The Sims 2
November 26th - It's time for our Friday Highlights! You can check them out here! 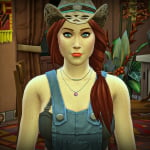 take0nme Posts: 3,682 Member
May 2015 in The Sims 2
I decided to re-download it again and I'm enjoying it more than ever. Of course having a complete collection is very nice but having the pets..all the life stages.. I haven't even felt the need to put in mods/cc.. there's so much to do in the sims 2 I haven't even paid mind. I'm sure i'll dive into that section later but I just have to say...

I really love the sims 2 and playing it now makes me realize how much I missed it. ♥♥

Anyone else still playing this series?