White
Sign In · Register
Home› The Sims Franchise Discussion
Simmers! Did you miss the Behind the Sims Livestream on Twitch? You can still check it out here. You can also follow along in the dedicated thread here as well.
It's Patch day! The latest update is now live for The Sims 4 which includes a whole heap of bug fixes and console improvements. Click here to read the notes.
January 27th- It's time for our Friday Highlights! You can check them out here! 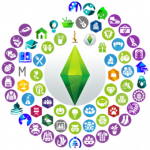 For example in The Sims 2 my first sims were Fox Mulder and Dana Scully from The X-files, Aerith and Tifa (Final Fantasy VII) and Lara Croft (Tomb Raider).