I sometimes feel like there is a hidden "bad luck" trait... 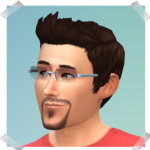 Stormkeep Posts: 5,416 Member
January 11 in The Sims 4 General Discussion
I have had a ton of issues with fires with my current Sim household.

When they had a toddler...she constantly was putting her wabbit tablet down too close to the fireplace. I think we went through 8 or 9 tablets, lost to fires, to that little tyke.

I also knitted a rug and put it down under the rocking chair...the chair itself never having caught on fire made me feel it was not too close to the fire.
Boy was I wrong.

Twice now Kim Goldbloom has decided to brew a potion while visiting this household. Both times, the kitchen stove caught on fire while she was cooking it...

Now I took the same Household on their first vacation to Granite Falls, and no sooner did I take one Sim away from the campgrounds and the campfire caused a massive fire. By the time I got my attention over to it the blaze was huge, we're talking 3x3 grid and everything in it on fire.

I can't remember the last time I had a Sim household with so many different instances of fires. It's freaking insane.

This post will be edited by StormKeep at some point.