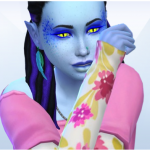 1. Allow ghosts to try for baby and have ghost babies, which are then a ghost toddler, child, teen, etc. In other words, allow players to treat them like full fledged occult beings and play a family of them if they wish too. I realize that child deaths are rare due to possible sensitivity around the issue and have no wish to alter those in ANY WAY. After all, we can cheat that if we want to. I'm talking about a family of adult ghosts being able to enjoy having a family including their children if the player wants to.

2. Please, PLEASE, stop with the autonomy to break everything. Seriously. Talk about ruining an experience. When a beloved legacy ancestor who spent their whole life happy and family orientated, comes back as a ghost and just spends their entire time ruining what they themself worked hard to build, it just makes me question what on earth is supposed to be fun about it? Sure, if a ghost dies of anger or has relevant traits it makes sense.

3. Allow us to make Ghosts in CAS. This, like (1.) is intended to allow players to enjoy playing as this life state without having to kill off sims if they don't wish to.


What other things would players like to see improved with ghosts?
Origin ID: 3989
19