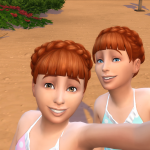 Lucy_Henley Posts: 1,404 Member
October 2021 in The Sims 4 Challenges, Stories and Legacies
As with my other stories/threads, there is no legacy or challenge in this story. There's more of a 'plot' to this one than my other ones.

Joshua Parker had... rather an odd childhood, he'd say. Now, as he raises his own children, he decides it is time to deal with his past. Can he balance therapy alongside a full-time job and raising four children, each of whom are very different?


The weather had been atrocious all day; such was the reality of autumn in Henford-on-Bagley. The dew collectors had been working overtime, in total contrast to the solar panels. Clover the cow and Cloudy the llama remained firmly indoors, as did the human occupants of 2 Olde Mill Lane.

Inside the house, each of the four children were dealing with their boredom in various ways...

"Wheeeee! Flying to da MOOOOON!"
Hazel, one of the older pair of twins, had a vivid imagination, and playing in front of the dollhouse was her favourite pastime. The stereo was constantly playing in the living room, and Lydia, Hazel's tomboyish twin, was often to be found dancing to the music. Meanwhile, Katie - who was best described as Little Miss Independent - was sat on the landing upstairs, happily playing games on her tablet. Over in the kitchen, Clara - who had inherited her mother's outgoing nature and her father's bad eyesight - needed to ask her daddy a question.
"Dada! I very stinky!"
"Ooh, yes," Joshua replied. "Let's go and run you a nice warm bath." As he bent down next to the tub, Joshua got thinking about the future. Hazel and Lydia were soon going to be growing up and heading to school. He remembered holding each of his girls for the first time and vowing that each of them would be allowed to pursue whichever career they wanted, without any sort of parental interference. Hazel's imagination didn't just mean she'd become an author, neither did Lydia's wild streak mean she was destined for life as a sports star. Life is pretty sweet, Joshua thought as he climbed into bed next to his darling wife Emily. I have a loving wife, four adorable daughters and my dream job.
Yet he couldn't help but feel like something was missing...