Asking to stay over 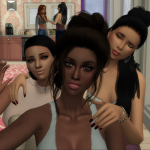 jheyjuneice Posts: 333 Member
September 2021 in The Sims 3 General Discussion
Every time I searched for an answer to this I only saw people talking about inviting an NPC to stay over but I'm looking for the other way around. I remember when my sim was visiting his mother's house, he had the option to ask her 'Can I stay over?' He was an adult and she was an elder. I noticed I couldn't do the same for his daughter who was a child. Now I have a teen and I've noticed that option also isn't coming up with her adult father. Is that option just for YA - Elder? If so is there any mods or anything to allow teens and kids to use that option too?