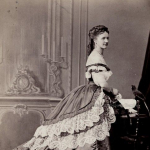 Last names go first in Shebi culture, so his Anglican name would be Bimu Shebi


FOREWARNING: There is xenophobic attitude in this story, but I do not endorse this. I am purely retaining attitudes commonly recognised in the real-world time period of the 1800s. I will keep it under a spoiler, so you can read it under your own volition and i do not claim responsibility from here on out for offense taken by the attitude due to the fact that it was spoilered.

- Henford Castle - January 29th, 1863 - 11:35 AM - Princess Cordelia wandered the halls of Thebe Castle, looking at the little village she was going to be the Queen of one day. she sighed and continued to her bed chamber, where she fell asleep.

- 3:02 PM - "Your Majesty, wake up! The Kingdom is in turmoil!" Cordelia was awoken by a guard, who quickly ran her through the halls as many bangs and explosions rang out throughout the castle. He led her through a secret network in the walls, and brought her out to a wagon, where she was brought to the River Bagley, and placed onto a submarine. The submarine was rushed from shore as soon as she boarded, and she disappeared into the ocean. For months, they mantained contact with the Submarine, before contact went dead.

"Storm clouds are closing in."

That is the last message received from the Submarine. Over 50 Sims were on that submarine.

- Symington Estate - August 11th, 1863 - 5:41 PM - "How on Earth could 50 Sims on a state-of-the-art Submarine disappear like that?" The General of HoB's army, Archibald Symington, exclaimed in exasperation. "We're working on it, Sir." A Guard responded, looking down." "That's all you say! 'We're working on it, Sir.' But nothing comes up!" The General shouted, looking angrily at the guard. "Now get out!"

The Guard quickly left the room. General Symington's wife Antonia entered the room. "Archibald, this is a stressful time for everyone, you can't take it on people like a guard. It's not worth it." She stated, resting her hands on her very pregnant belly. "Let's just go home and relax. Remember, We have that dinner at the Watson Estate."


- Simonic Ocean - Cordelia struggled to keep afloat on the table she had found after the submarine had flipped over and flooded in the storm. She was the only one she could see or hear. She looked up at the stormy sky as the clouds started to part.

- En route to the Watson Estate - 6:23 PM - Archibald, called Archie by close relatives and friends, looked out of his carriage at the Bagley River, which had given fresh water to the citizens of Henford-On-Bagley since 1156. "Archie?" Antonia put her hand on her husband's shoulder. "Hm? Yes? Is something wrong?" "Oh, no. It's just that you're pretty quiet. "I'm just thinking about the Princess. I mean, we've already lost the King and Queen, what if she's dead too? What will become of our nation?" "I know. I'm worried of that too. But you must keep a brave face and hope for the best." "We're here, My Lord and Lady." The Coachman called. The two exited their carriage and greeted Lord Henry and Lady Marie Watson. "Lord and Lady Symington, welcome to our grand estate. We are overjoyed that you would come visit. Now, come in."

- Simonic Ocean - "Hello! Hello! Help Me!" Cordelia called, hearing nothing but the ocean as it calmed down from the storm. Then she glimpsed an island in the fog.

- Watson Estate - 6:54 PM - "Now, shall we eat?" Henry questioned rhetorically. Everyone sat down and began to eat the spread of lamb, potatoes and lettuce. "My, this is delicious!" Antonia exclaimed. "Yes, our chef spent 6 hours preparing it." Marie said, smiling. "How lovely." "So, did you hear that the Queen of Delasolia sent 500,000 Simoleons in aid for our crisis?" Queen Maria Theodora de la Realeza of Delasolia, granddaughter of famed Queen Louisa Nanette, had sent half a million simoleons to Henford-on-Bagley in reparation after the Great Sloth Invasion had decimated Henford-On-Bagley and killed 76 of the City's 300 citizens.

"How is the pregnancy?" Marie asked. "Oh, it's doing very well. I'm expected to give birth in a few days." Antonia responded, smiling. "How lovely!"

- Shebi Island - Cordelia landed on the island, and was immediately surrounded by natives. "Who are you? Tell us who you are!" One native dressed in feathers and beads demanded, pointing a spear at Cordelia. "Cordelia! I am Cordelia Thebe and I was stranded at sea after a shipwreck!" The natives murmured, staring at Cordelia with many emotions, such as fear, concern, warmth, and anger.

August 12th, 1863 - 12:02 AM - "Welcome home, your Graces. How was the dinner?" The Symington's Butler asked. "It was lovely, Henri." Antonia responded sweetly. The couple soon headed upstairs to get changed into their nightwear.
"I'm so excited to have this child. I pray for it's health. And that it's a boy." Antonia joked, speaking to her maid that was helping her into her nightgown. "Yes, we all pray with you, Lady Antonia." Her maid responded, smiling.

- Shebi Island - "You are the daughter of Matilde Thebe. She came to the island once. We shall not hurt you." The chief said, looking at Cordelia. "You will be-" Suddenly, the ground shook violently, and screams erupted all around them. The Chief and Cordelia ran out to the village square. "What is going on?!" He demanded of a villager. "Wave...Big Wave!" The villager shouted as he ran away from them. Moments later, they were swept off their feet and across the island by the water. The Chieftain managed to grab onto a sturdy structure and grabbed Cordelia. He pulled her onto the platform and they waited out the disaster.

- 8:30 AM - "Good morning, Lady Antonia." Her maid said, helping her over to her closet to put her into some clothes. Later, Antonia sat down to eat breakfast. "Did you sleep well, dear?" Archie asked his wife, resting his hand on hers. "Yes, I did. Although I felt some- Ooh......" She began to say before she felt a pain in her stomach area. "Are you alright?" Archie asked, with concern. "Ye-yes, I just feel a bit- Ohhh my..." "Oh my God! My wife is in labor!"

The maidstaff quickly brought Antonia to her bedchamber and set her up to give birth. The birth went smoothly and a few weeks passed.

- Symington Estate - September 3rd, 1863 - 12:34 PM - "General Symington, we've received word that a gyp*sy woman has knowledge of Princess Cordelia's location." A guard entered their sunroom and informed them of Cerissa Boulanguire, a 74-year-old gyp*sy woman from Champs Le Sims, who emigrated to Henford-on-Bagley at 23. "Well, let's get going! This could help us." "What? There a myriad of issues with that. Firstly, I can't go anywhere.
Secondly you're placing trust in a gyp*sy! Those people are devil-worshippers. Trusting them is like trusting a snake. A devilish snake."
Antonia stated ignorantly. "It's better than nothing. And anyway, even if she's wrong, we'll have tried." Archibald said with dignity.

- Shebi Island - "Cordelia, Let me make you Chieftess, where you can rule with me as my wife." Bimu said, presenting Cordelia with a headband made of flowers. "Really? You're certain you want this?" Cordelia asked with caution. "Yes, as Avolkah has spoken and told me that it is what my truest desire is." Avolkah was one of many Shebi Gods, and Cordelia had converted to their faith. "Then yes! If it is your truest desire, then I shall accept!"

- "City of Mystics" - September 3rd, 1863 - 1:16 PM - The gypsies all gathered to stare at Archie as he stepped into the "City of Mystics", a 2 mile long gathering of tents where over 200 Gypsies from over 30 different ethnic areas resided, shunned by society. Archie asked one gyp*sy to bring him to Cerissa Boulanguire and he went to her tent. "Archibald Symington. I've been expecting you." The 74-year-old Cerissa said ominously, while having her back to Archie. "H-how on Earth do you know my name?!" Archie said, trying hard not to falter. "I know everything in the universe. I have seen Father Time, I have seen God, and I have seen the Devil. "I know you search for Cordelia. You will find her on Shebi Island in the Simonic Ocean. The island is small and remote, and surrounded by rocks. The voyage will be difficult, but I know you will make it." A man entered the tent. "Madame Mystique, the twins are here." He said, letting in two twins who were blind in opposite eyes. "Thank you Sergey." Sergey then left the tent. "what do you need, you two? We have seen the beautiful princess Archibald speaks of." One said. "She is going to marry the Chieftain of Shebi Island." The other stated. They then ran off. Archibald thanked Cerissa and he set off back home. He immediately began the order a ship to venture to Shebi Island.

- Shebi Island - September 24th, 1863 - 10:32 AM - Cordelia walked down the island to the lush garden in which she was about to marry the Chieftain of Shebi Island and be given a new name to coordinate with her residency on Shebi Island. She walked into the garden and stood by Bimu, smiling. The Priest gave them rituals and blessings, and pronounced them married. Cordelia's new name was Nimur and she was ready to accept her role as Chieftess. Shebi Nemur. Nemur smiled at her new name, and she spent the rest of the week partying in celebration of her marriage.

- Port Bagley - September 24th, 1863 - 10:50 AM - "So are we ready to go, Captain?" The sailor asked Archibald as the rest of the crew finished loading all of the cargo. "Yes, yes. Let's set sail. Destination: Port Cordelia's Hope." The people of Henford-on-Bagley had named Shebi Island Port Cordelia's Hope out of hope for Cordelia. As the ship departed, Archibald looked back at Henford-on-Bagley, full of uncertainty for his future, Princess Cordelia, and the Empire of Windenburg and Henford. "May God bless our voyage and our Princess." Archibald said, heading downstairs to the inside of the boat.
Post edited by MyriadSims on August 23
Hurley Dynasty (Decades Challenge)