White
Sign In · Register
Home› The Sims 4 Modding & Custom Content› Gameplay Mods
February 3rd- It's time for our Friday Highlights! You can check them out here! 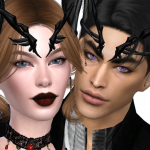 Missmagoo2 Posts: 1,248 Member
August 2021 in Gameplay Mods
This past weekend I came upon a glitch while playing my long-running game. I've never seen this happen before, but maybe someone could shed some light on the situation. Or maybe someone else has experienced the same?

So, I opened my game and went to play one of my families (I play many households) and noticed that two of them were renamed as deleted premade sim names. Sim "A" and his son "B" were renamed Ekram Elderberry and Thomas Jabari. I opened CAS and sure enough, they were renamed there as well. I even restarted the game and still had the same problem. So, I just changed them back to what they were. Nothing else but the names were changed. Then I played a bit more and nothing else happened.

However, when I went to play again this evening, I started playing with another one of my households and found that my sim "C" was renamed to Victor Feng and his wife's last name changed to Feng, too! She got to keep her original first name.
I should have taken pictures, but I was eager to play and annoyed enough to change it back right away. If it happened again, I'll take a screen shot.
Like Kpop? Like Greek Mythology?
☆ﾟ.*･｡ﾟ Follow me on the gallery ☆ﾟ.*･｡ﾟ Origin ID: Missmagoo2
Ｏ(≧▽≦)Ｏ

(I work with CC so make sure you check that box to see my "hidden" content!)