White
Sign In · Register
Home› Forum Ideas & Feedback
Simmers! Did you miss the Behind the Sims Livestream on Twitch? You can still check it out here. You can also follow along in the dedicated thread here as well.
It's Patch day! The latest update is now live for The Sims 4 which includes a whole heap of bug fixes and console improvements. Click here to read the notes.
January 27th- It's time for our Friday Highlights! You can check them out here!

Bugs and The Sims 101 - Everything you need to know - Discussion 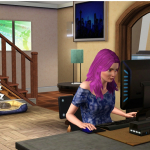 EA_Arcadia Posts: 14 EA Community Manager
July 2021 edited July 2021 in Forum Ideas & Feedback
Have any questions or comments about our recent discussion about Bugs and The Sims, here's the best place to leave them.
3