Show me your vampire Sims 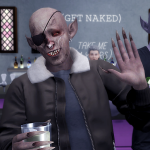 Yautjagirl Posts: 249 Member
June 11 edited June 11 in The Sims 4 General Discussion
I wonder if there is anyone else who has as many vampires as I do XD Yesterday I made a compilation of all of my vampires from my main save game where I play rotationally. and these are in game born kids of my vamps

I would love to see other simmers' vampires and their progeny.

And would love to know how do you handle aging of both game born and CAS created vampires.
I allow aging to YA only to vampires that are born in the game. I have a teen vampire girl who is not going to age as she was turned as a teenager.