White
Sign In · Register
Home› Off Topic Chat
Sul sul Simmers! Join the celebration and tune into our Twitch live stream today, Feb 25th, @11 AM PT / 7 PM UTC! 🎉
Feburary 25: Today is patch day! 😃 To read the patch notes, click here!
February 26 - Is everyone ready for the Friday Highlights? Check them out here.
Welcome to all NEW SIMMERS joining us on the Sims forum! 🎉 Have fun on the forum and please make sure you check out the forum rules and
the rules about necroposting. 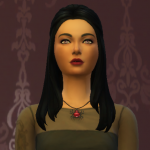 morganlefaye Posts: 120 Member
February 15 in Off Topic Chat
I have two robots who adopted, two children, the eldest is a daughter and the other is a son. The mother robot died, so I waited a while for the father robot to get a girlfriend, once he did, I had the son, befriend her and become his girlfriend, they had a child together, which the mother's child is married to the robot now. So Layla, the baby is the daughter of the son, who's father is a robot which the robot is her stepfather/grandfather.

I love making a messy family tree. I wonder how long I can keep doing this for?
0