Re-installing the Sims 3 again, I really dont like the Sims 4 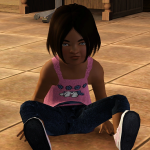 kiara07 Posts: 570 Member
February 9 edited February 9 in The Sims 3 General Discussion
Like 3 months ago or so I unistalled the Sims 3 because I got annoyed with the game freezing and then me having to exit the game by force without saving, on that day in specific I had error 12 which I hadnt had in years so that was the last straw. I thought ok I will unistal the sims 3 and play the sims 4 until May when I will get my sims 3 CDs again. That will force to play the sims 4 and make my money worth, since I bought a few expansions and game packs and even a stuff pack. Well that didnt work, this time I managed to reach generation 3 in the sims 4 which is a miracle (in the sims 3 I have a save on generation 14 and still going, I saved the saves before unistalling) but I still dont like the sims 4. The game has a few good things I cant deny but I just can get attached to the sims for some reason. But I think its the lack of open world that kills it for me. I bought get to work ep to open a business and I dont even have the will to try it and I also didnt even try the careers, and I have the cats and dogs ep and I also havent tried being a vet.

So basically ever since I unistalled Sims 3 I have been suffering from withdrawal and instead of playing the sims 4 in my spare time, I have been watching sims 3 current households and worlds overviews on youtube. Now as I speak I am installing the sims 3 again, turns out its on my Origin account for some reason. The only disadvantage is I will be playing with the 1.69 update. Anyway it wont be for long, my boyfriend is gonna build me a desktop maybe in April, and I am gonna ask my brother to send me the sims 3 cds by post, so I just need to get used to play with the 1.69 until everything goes back to normal. I cant believe I can play sims 3 again. I have been downloading mods during this time so I am excited to try them out