White
Sign In · Register
Home› The Sims 3› Creative Corner› The Sims 3 Stories and Legacies
Simmers! Did you miss the Behind the Sims Livestream on Twitch? You can still check it out here. You can also follow along in the dedicated thread here as well.
It's Patch day! The latest update is now live for The Sims 4 which includes a whole heap of bug fixes and console improvements. Click here to read the notes.
January 27th- It's time for our Friday Highlights! You can check them out here! 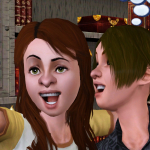 Sprottenham Posts: 784 Member
January 2021 edited December 2022 in The Sims 3 Stories and Legacies
Click HERE to skip the prologues (takes you to Chapter 1.1 - Springtime of never-neverland.)
TABLE OF CONTENTS (inside spoiler to save you from scrolling)
0: Prologue.

Chapter 2 (Optional side story if you don't want to read about war.)

Chapter 4 - A continuation of the storyline introduced in chapter 2.

6: Oliver Freddy and Inge - what's next?

Sunset Valley May: Spring Party Time/Kristinas birthday
14.8 – Lake Onebega: Exam... and let's get the party started.
14.9 – Sprottenham: The girl by the Harbour Café..


PLUM TREE FAMILY TREES:
The plum tree family trees are subject to constant updates, some may be incomplete.
Right click and open in new tab/window if you don't want to leave the thread.
Primary families:

In game family trees inside spoiler (some of these may be outdated because sims have aged up, etc.):
Ranveig Motorsen: 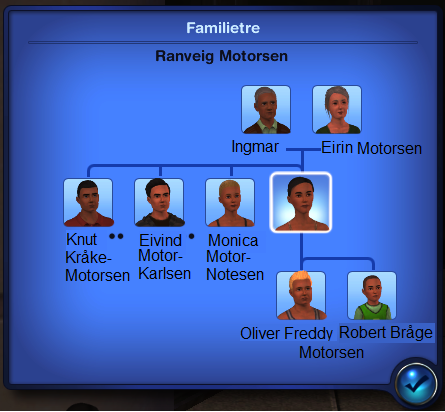 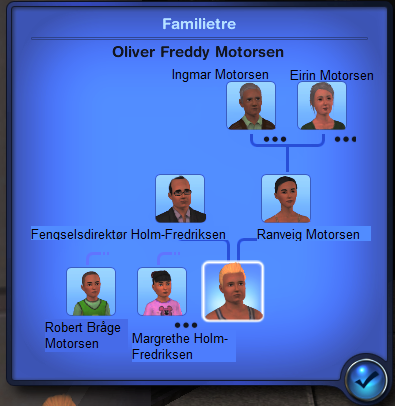 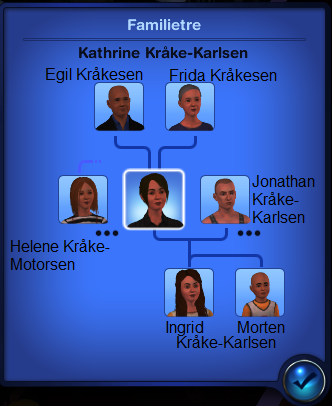 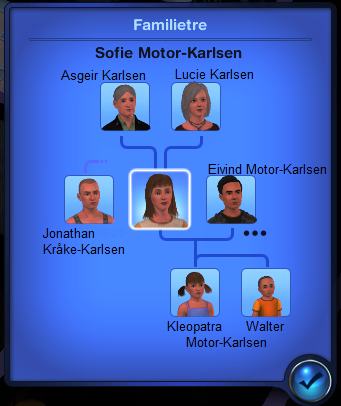 I must start with a birds eye view of everything and some background information to create a context for my story, complete with an over the top title to make it sound epic or something. Alright, here we go!

Prologue 0.0: The United Kingdom of Simbria.

The United Kingdom of Simbria, commonly known as Simbria, is a sovereign state comprising of six countries on the greater island of Simbria located in the Westphalian Sea on the northern hemisphere of the Simtopian Planet. It is a very big island, almost the size of a continent and thus covers many climate zones ranging from maritime subtropical on its southern tip to maritime subarctic on its very northenmost edge. 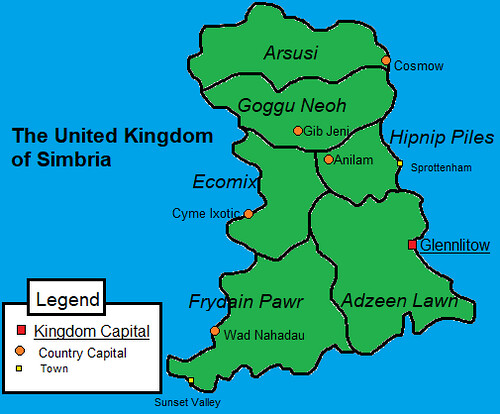 On the southwestern part of this large island state lies the mountaineous country of Frydain Pawr. Most of the population of this country is centered around it's capital Wad Nahadau, but this is not were our story plays out.

The small town of Solskinnsdalen, also known as Sunset Valley, is a small and fairly isolated town on the southwestern edge of the great island of Simbria, in a country called Frydain Pawr. A long time ago, there lived a man called H.K.H. Høigaffel. Already while he was alive, he rose to legendary status as the most impressive chess player the Sim World had ever witnessed. In the year of 1783 sim time, he founded what is known as Solskinnsdalen Schak-klub (Solskinnsdalen Chess Club). It was here he would spend the majority of his days, challenging people to a game of chess, or writing on his best selling books about the magic, mysteries and strategies (as well as joys) of chess. From the money he made on his books, teaching chess and winning tournaments all over Frydain Pawr, he erected a tower to be his home on what was then the outer edge of the town area. The tower quickly became somewhat of a landmark and tourist attraction, and were nicknamed "The Rook" by the locals, as it resembled the chess piece with the very same name. 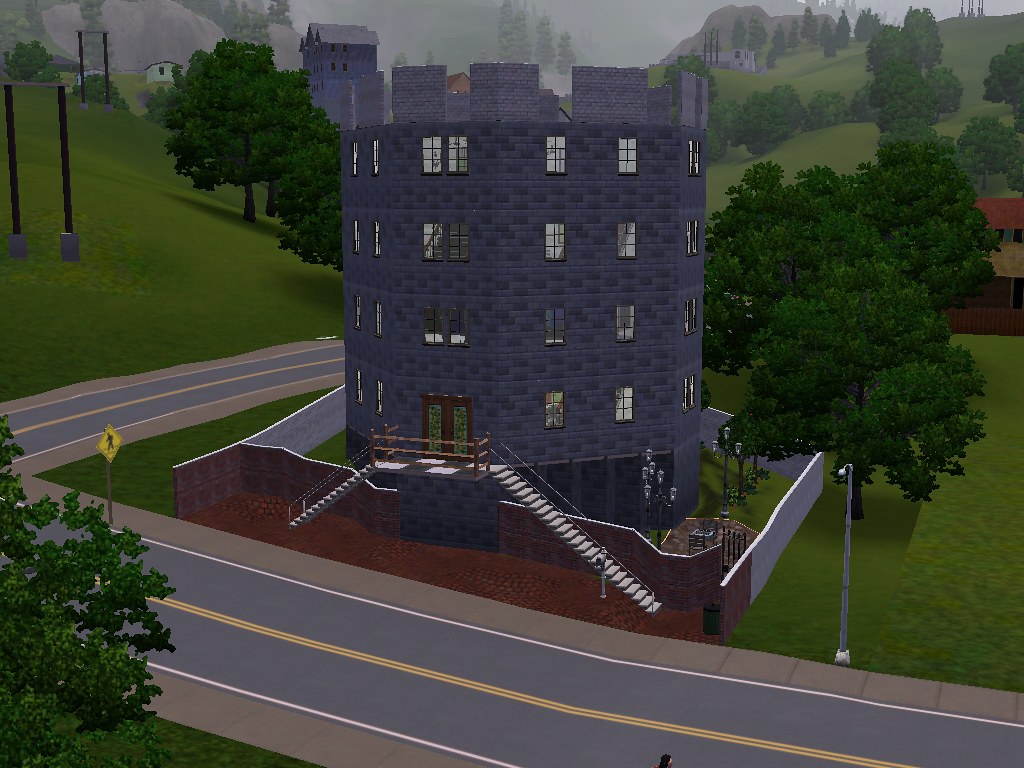 As this was long before the invention of the camera, no pictures of H.K.H. Høigaffel exist, but there is a painting of him by an unknown painter (ca. 1795) hanging up in the lobby on the second floor of the chess club. 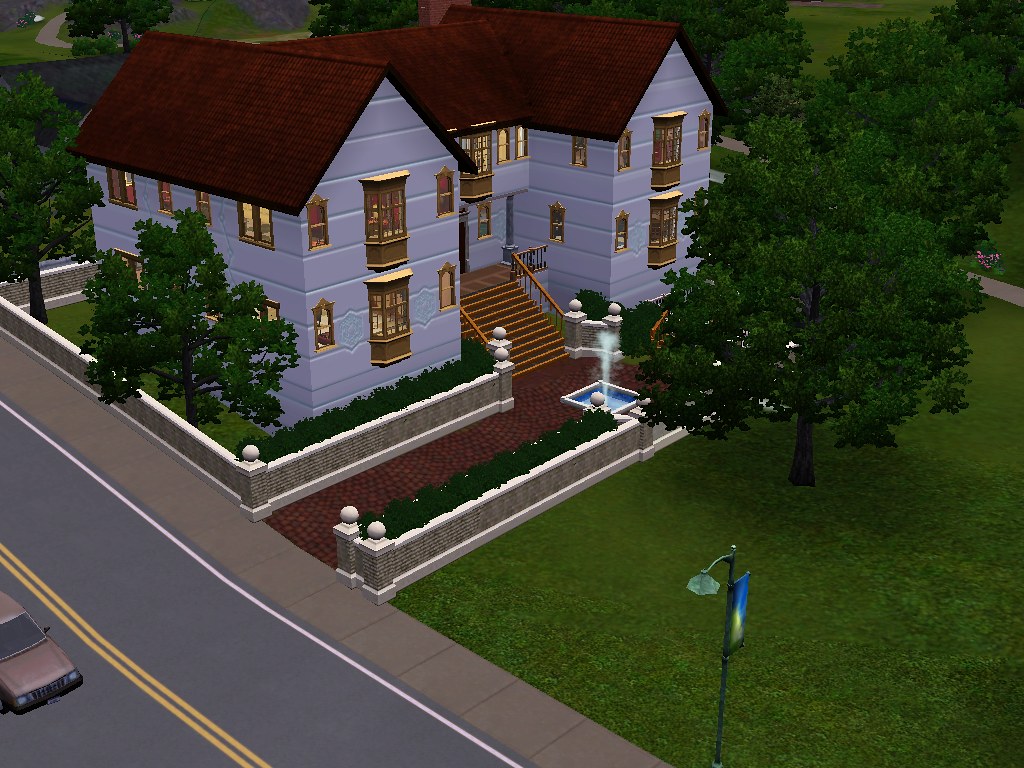 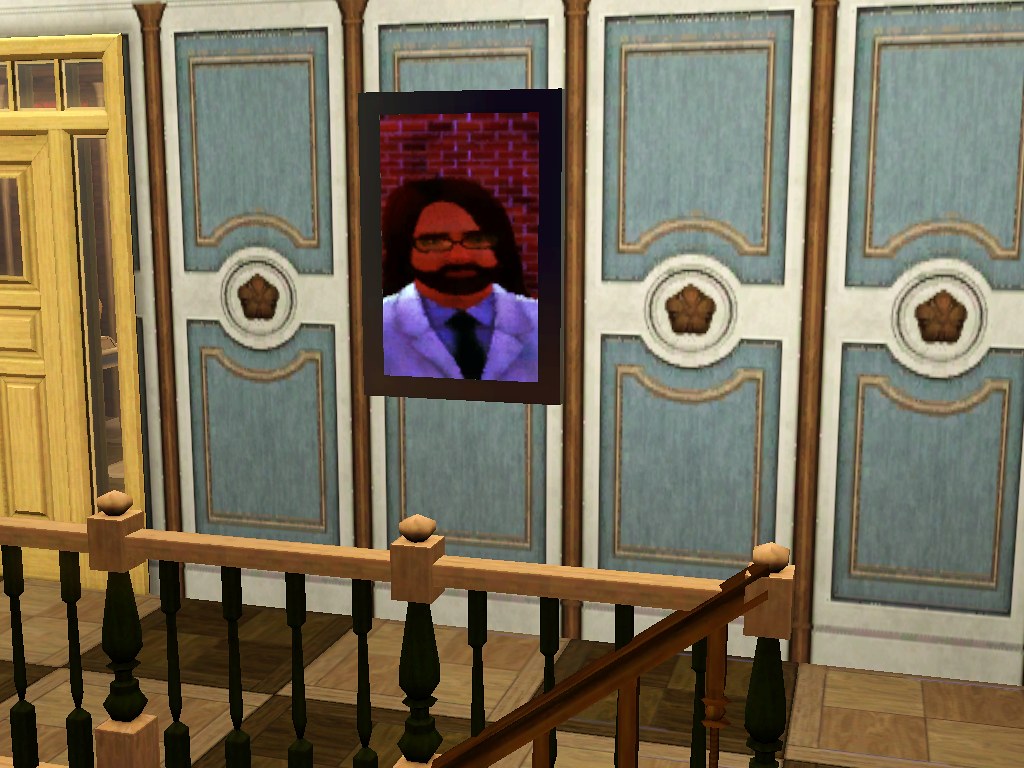 Portrait painting of H.K.H. Høigaffel by an unknown painter.

As far as legend has it, H.K.H. Høigaffel did not enjoy any romantic relations, preferring to stay by himself until old age when he eventually befriended and married a sim called Joika-Kari Bastiansen. Joika-Kari was an avid gardener for the last days of her life. Officially she died of old age, but evil tongues still gossip that she died while they were woohooing in bed. 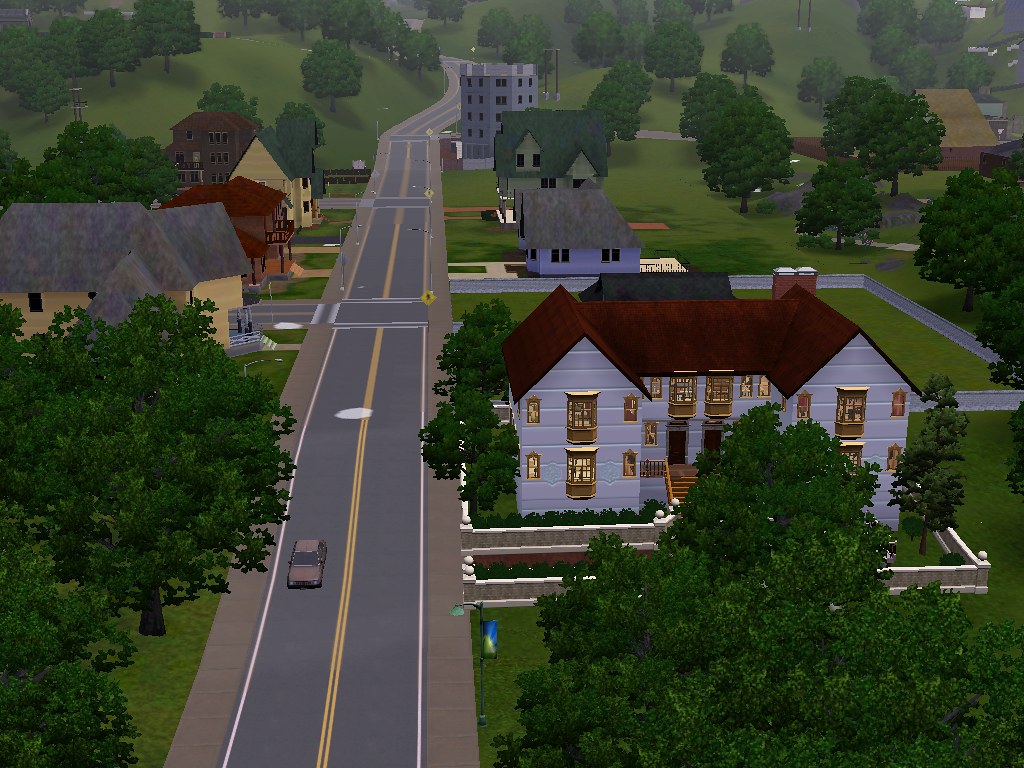 Modern day aerial photo of the chess club, with the tower "The Rook" in the back of the picture.

H.K.H. Høigaffel lived for a long time still after her death, and it was then he became an avid painter. After his death, his tower was left abandoned for years and almost fell into ruin, before the town council in 1873 declared that it should be restored to it's former glory and be opened to the public as a museum. At the same time a memorial stone was placed by the entrance of the chess club. It is rumored that if you stay at the chess club late at night, you may catch a glimpse of H.K.H. Høigaffel's ghost still roaming the corridors, or maybe even challenging you to a game of ghostly chess. 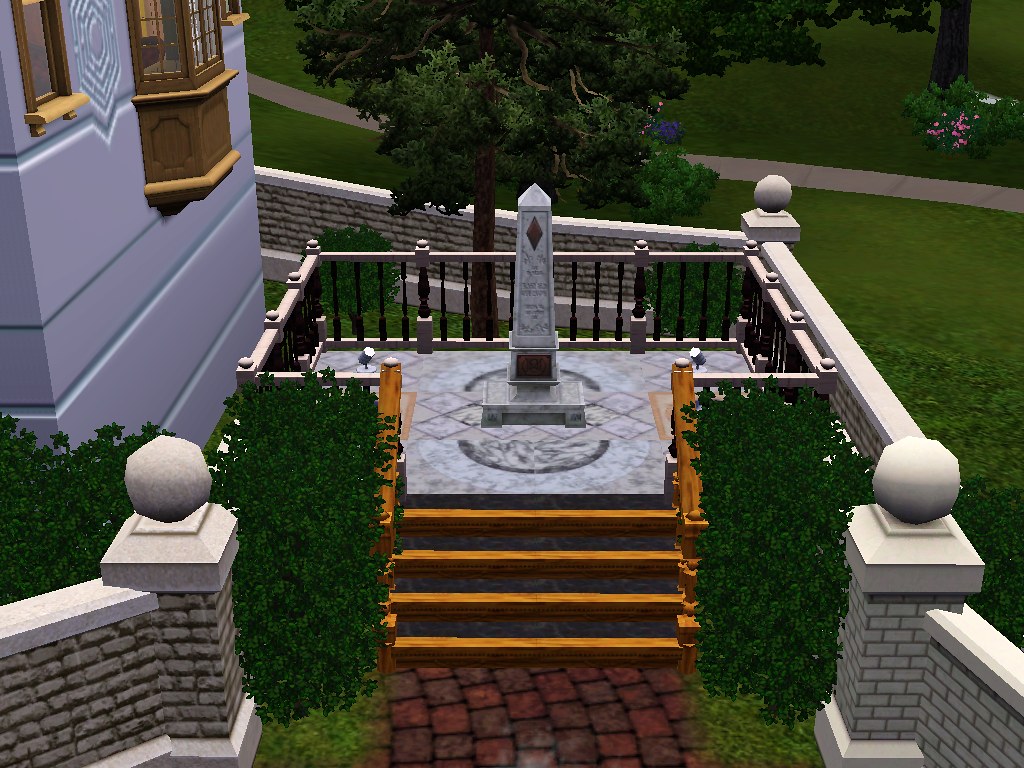 H.K.H. Høigaffels memorial stone by the entrance to the chess club.

~~~~
10.05.2021: I just recently discovered that a lot of pictures are now missing from the tread. The pictures are not gone, the links are just broken because their url changed. I am working on updating the posts with new urls one by one, but it could take some time. I apologize for the missing pictures.
04.11.2021: All pictures updated. It just took me about 5 months...
Post edited by Sprottenham on December 2022
Blog: The people of Simbria where I repost chapters from the beginning.
Story threads in the creative forum:
The people of Simbria