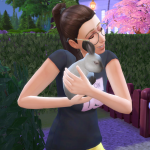 While I was playing my MySims Legacy Challenge the Ridley Residence, I suddenly wanted to try out another way of playing a Legacy. A 'Follow the Whim' Legacy, which I'm about to explain here.

The Rules
The rules are simple: just follow the heir's whims. Don't make any choice on your own, your heir tells the story.

I also allow myself:
- To fill needs when needed
- To follow aspiration goals
- To complete tasks on social events
- To move your heir to another lot ONCE in their lifetime

Overall, my heir will create its own story and I'll just follow along.

I still use a few of the original Legacy Challenge rules to get started. For example, the Succession Laws in my gameplay are the following:
- Equality
- Modern
- Democracy
- Tolerant

This means that both girls and boys can be named heir and it doesn't matter if the child is adopted or not, or if they're from another species than human. Whenever I feel like it (probably when every child is a teenager), I'll open a poll where everyone from the Sims Forums can vote for the next heir. The one with the most votes will become the next heir when he or she ages into a young adult.

I'm pretty flexible when it comes to this Legacy Challenge, but if you want to add some more spice to the challenge, be free to do so! I like the fact that this gameplay is rather relaxing. I just follow along, take screenshots, make a story, ... Just how I like it, but if you want to do it a little different? Go ahead! Maybe you even inspire me

Most of all, have fun!

My Heir
My heir is a Sim I once made for another person's Bachelor Challenge. I liked her so much that I tried using her in a SimLit story, but then I decided that writing a real SimLit story is just nothing for me. I dropped the story, but I couldn't drop the Sim. She's just so cute and I love her personality so much, so I decided to give her a third chance in Sim Life, here in this Legacy.

Eliza Hampton is a cheerful sim. Always happy, even if life is so against her. Aside from that, I designed her to be stronger than she looks. She loves sporting and she had this dream to become a police officer from the day she was a little Eliza. The way I saved her in my Gallery, Eliza is working in the Secret Agent Branch, but I decided to get rid of that. More of that later.

So, she has a dream and she has hopes to make her dreams come true, but then there's also this clumsy side of her. Whatever she holds, breaks. I certainly hope for her this does not include her love life.

Eliza won't start living on an empty lot. The way I see life, young adults that start living on their own, live in an apartment. Of course, I decided to go with an unfurnished apartment to still have some kind of challenge. Welcome in San Myshuno, Eliza!
Post edited by Skeilah on September 15

Follow the Whim Legacy - MySims Legacy
Always in for a talk - Add me on Discord! Skeilah#3953
Check out my blog!
2