White
Sign In · Register
Home› The Sims Franchise Discussion
Sul sul Simmers! Join the celebration and tune into our Twitch live stream today, Feb 25th, @11 AM PT / 7 PM UTC! 🎉
Feburary 25: Today is patch day! 😃 To read the patch notes, click here!
February 26 - Is everyone ready for the Friday Highlights? Check them out here.
Welcome to all NEW SIMMERS joining us on the Sims forum! 🎉 Have fun on the forum and please make sure you check out the forum rules and
the rules about necroposting.

The Sims 4 has less advanced genetics than previous Sims games?

SimmerGeorge Posts: 1,992 Member
November 2020 edited December 2020 in The Sims Franchise Discussion
Hey guys,
So this video by PleasantSims just came out and it is a comparison between Sims 2, Sims 3 and Sims 4 genetics. I clicked on it thinking that of course the Sims 4 genetics will be the most advanced, realistic and complex but was surprised to hear Pleasantsims state the opposite during the first few minutes of the video: 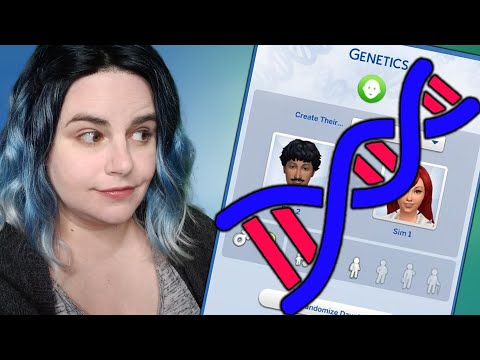 It's quite long so I summed up most of the things mentioned by PleasantSims:

So basically the Sims 2 had a really complex and realistic genetics system:

- It had recessive and dominant genes for hair, eyes, skin, face etc (for example black hair was dominant while ginger recessive)
- the sims had actual DNA, that had information of recessive genes in it that you couldn't see in their appearance. So for example if a sim with black hair had a baby with one with ginger hair and the baby got the black hair from the father, the baby would still have the ginger hair as a recessive gene in their DNA and there was a chance that this gene would be passed down as recessive through several generations.
- to an extent personality is also genetic (the apple doesn't fall far from the tree)
- a pretty complex alien genetics system which is explained better in the video

The Sims 3 are much simpler:

Now the Sims 4 which is unfortunately the least complex, advanced system of all:

- No recessive genes passed on from previous generations, parents must have them to be passed on (so no genes from grandparents, great grandparents etc)
- skintones are usually in between the ones from the parents (even if the tones completely differ)
- hair is either the mother's or father's and if one has an unnatural hair color the system often chooses the most random hair (ex. father pink, mother blond, child gets brown hair)
- But hair texture can be inherited (so that's neat) but only with the same color as the parent with the textured hair (which is again a big limitation)
- eye colors used to be inherited with a 50/50 chance but after new eye colors were added the system is messed up and generates random eye colors no relative has (explained in video)

If the info in this video is accurate and true then I have to admit that I am quite dissapointed that even the genetics system regressed in the Sims 4 compared to previous games. The genetics is one thing many of us, including me, don't really know if it works correctly or not since you have to do a lot of experimenting to see if it really works well and after this analysis by PleasantSims it's kind of a bummer to see it doesn't. You'd think the Sims 4 would have a more advanced system.
One positive thing is that it helps with the issue of neighborhoods ending up with just dominant black hair and brown eyes on everyone but still I am not a fan of this mindset "If something causes issues just remove it", what about trying to fix it though?

Anyway I just wanted to inform everyone of this new video and maybe hear your opinions on it, especially considering the Sims 4.