Community portrait - here's one from my Region 12

Simmerville Posts: 8,305 Member
September 16 in The Sims 4 General Discussion
I had so much fun executing this session, so I figured I want to share the result. It's a time stamp from my game, a huge group photo including most of my central households. I do play nobility, but there are of course even more common households, and the total sums up to 70+ actively played households. 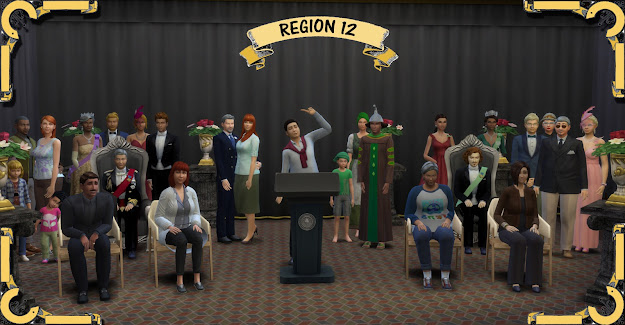 On this photo the new Region 12 Council is seated front, you might recognize Edvin Phlum, Fanny Silverbone, Charloman Au. C. Dougham (Mayor), Josue E. Rosewood or Charlotta Mu. Crumpleton from some of my many videos or blog projects. The two dukes are seated farther back - the Duke Aquess de Cavalier with family, and the Duke Victus Amador of Meadows. And the rest of the families are high nobility peers with households (babies, pets and servants did not make the cut).

Because my save game is 6 years old, many families are related. On my blog there is now a family tree showing 225 years of family lines. Naturally there is more info on the high class. I've posted more on each pictured household my blog

Do you make community or group portraits from your game, that is not limited to one household? Please share!

Simmerville on Youtube | My blog is updated weekly: Simmerville's Sims