Show me your current Sim Families! 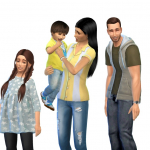 I love seeing the Sim families others play with and read their stories. So I thought I'd open up a little thread in which we can share just that.

I won't start sharing mine right away, would love to see yours first, so feel free to post pics and tell me your stories.