White
Sign In · Register
Home› The Sims 3› The Sims 3 General Discussion
August 14 - Everyone ready for the Friday Highlight? It's ready for you here!
Are you ready for the The Sims Spark'd? Discuss the final episode here! Don't forget to use spoiler tags! Need a refresher? Click here!

Have you ever won the lottery without going to Oasis Landing? 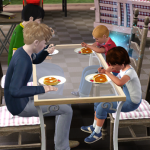 Jeansoo Posts: 3,007 Member
July 25 edited July 25 in The Sims 3 General Discussion
Hi, I'd like to start a new game about a teenager sim who is looking forward to the jackpot from lottery without going to the future. Will it be possible without seeing the past history of lottery in the future? Sorry for the bad English