White
Sign In · Register
Home› The Sims Franchise Discussion
Sul sul! How many baes is too many? The answer is NONE! Join @kelseydangerous on her journey of love as she attempts to maintain 100 romantic relationships.
Follow along on her road to love here!
September 21st: Today is patch day! 😃 To read the patch notes, click here!

Should facial recognition tools be used for TS5? 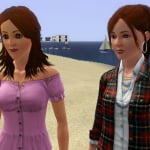 king_of_simcity7 Posts: 25,030 Member
July 2020 in The Sims Franchise Discussion
Imagine this, right. You get these facial recognition tools all over the place these days for security and even social networking sites seem to recognise you. Now imagine this. You have a proper CAS in TS5. Have all the cool features such as we have had in the past few days but also an option (and it should be an option) to upload your own pictures from somewhere and for the game to actually 'Simlify' them.

For some players who want to make themselves or their friends then it could be fun. Add your friends in the Sims and make some cheeky edits. Want a celebrity in your game? Get a picture of them and you could get a Sim of them straight up.

This could be a cool feature!