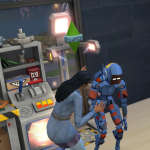 CeiCeiH Posts: 41 Member
July 1 in The Sims 4 General Discussion
I have a Sim who is in the law career and on level 4. I had a hard time getting him to attend deposition via a computer, but it did work with his phone. Now the only task he has left is to take the exam, but he can't regardless it he's on a laptop or desktop. Does anyone know how to solve this issue?
~~ Nothing like being a happy Simmer! We let all hell break loose!!