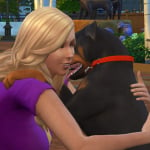 LadyTachunka Posts: 1,437 Member
June 25 in The Sims 4 Game Feedback
I know some people might not agree but I just would love to have babies to be part of the family it kinda annoys me that babies are objects. Yes you can age them up and have toddlers but babies irl have more personality then the potatoes we have.... I know people are gonna say well they’re there for 3 days but I would love to play a full life

What I would love is to have them be like sims two babies but have the objects forms sims 3 with changing tables and be able to put clothing and little bows or hats on them. Have children be able to hold them with pillows in their laps

Been simming since the end of sims 2~
Sims Gallery ID:LadyTachunka