We should have an option to choose a sim's pronouns. 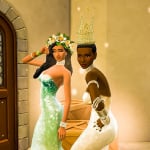 NiaraTiara Posts: 91 Member
June 23 in The Sims 4 Game Feedback
Now I'm not sure how this would work with other languages, but I really think there should be an option under "gender preferences" to include which pronouns our sims use. And another option to include which bathroom they use.

I personally don't create trans sims very often, but when I do, I'll usually pick the gender they were assigned as at birth, and then change their physical frames and their clothing preferences in order to fit whichever gender they identify with now. The problem is, the UI will constantly misgender them, and it's very jarring to look at.

For example, I once created a trans woman named Alexia. She has two twin brothers. Though on the gallery and in the relationships tab, she doesn't appear as their sister; when you hover over her, she'll show up as their 'brother'. In game, you'll constantly get notifications like, "Alexia just came home from work. He did a pretty good job too." And whenever there's one of those bathroom stalls placed on a community lot, Alexia will walk into the mens room. Not very realistic

The Sims Team overall has done a pretty good job with LGBT representation so far, so I hope they could fix this one issue.
Let there be Fairies!