Are they freeing the babies? 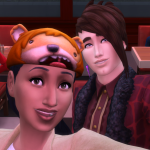 are they freeing the babies?
9