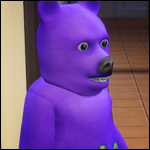 Been a long time, huh?

My computer kind of died and I lost all of my saves, my sims, my screenshots - everything. It was really devastating to me because I was working so hard on my stories and playthroughs. Because of that, I took a long break.

In a way, I feel like it was a blessing in disguise because I was working on soooo many series at one time and then I made a schedule that I was trying to keep up with... it was only a matter of time before I became very overwhelmed lol

But now, I've got my computer back and have started ONE challenge. Unbelievable, right? haha The challenge I chose is no cakewalk, either - it's the 100 baby challenge!!

If you'd like to follow this challenge, you can do so by visiting the Wordpress I made for the series - The 100 McKnights.

It's not simlit, it's basically just pictures with short little captions, but I hope someone can come to appreciate it as much as I do ^-^/ Thanks for stopping by~ You can check the next post for the current table of contents.
🦙 🦙 The 100 McKnights (100 baby challenge) 🦙🦙
1