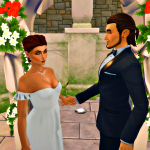 Duvelina Posts: 1,149 Member
June 2 edited 7:08AM in The Sims 4 Challenges, Stories and Legacies
Hi all,

Read the story on my blog. It's the only place updates will follow from now on. I will still update this thread whenever there's a new chapter and you're welcome to reply here as well as comment on the website.
Post edited by Duvelina at 7:08AM