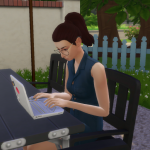 Skeilah Posts: 659 Member
May 27 edited August 13 in The Sims 4 Challenges, Stories and Legacies

I will post 1 Chapter every:
For the MySims-part:
For the Legacy-part: I'll play like this.
Generation Goals
In order to complete a generation, I'll need to complete all of the Generation Rules (I call them 'Goals'). Those Goals are different for every Generation. I'm not going to sum them all up in this thread (that's going to take too long). You can read everything in alexis3142's thread, but you'll also find the Goals for a specific Generation on my website, right next to the Chapters for that Generation.

Don't mind the extra things written next to all the Goals. I'm a bit (a lot) ahead and that thing is pretty much always up-to-date.

Generations and Chapters
I'll post all Chapters in this topic. In the second comment of this thread I'll make another post with all published Chapters together.

Family Tree
Of course there's a Family Tree, but beware: spoiler alert!
You can find it here: https://www.theplumtreeapp.com/public/5ec3cac97c6e720006cab96a


I hope you like the story! Here's Chapter 1 for everyone to warm up.
Post edited by Skeilah on August 13