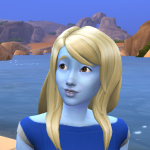 Atreya33 Posts: 1,245 Member
May 18 in The Sims 4 Game Feedback
Yesterday I wanted to edit a sim in CAS. For head accessoires we can view 'all', or 3 categories (earrings, glasses and necklaces). Because piercings are added onto the earring category I now have to scroll past all the discover university piercings to find earrings. And with possibly more piercings on the way with eco lifestyle, this will only increase.

I realise that medically speaking they are the same thing. But culturally there is a big difference between earrings (traditional jewelry used by women from toddlers to elders) and piercings (mainly associated with young adults and being rebellious). Because of these differences, it is tedious to always scroll past piercings to get to the earrings if you just want traditional earrings on a sim.

It is only a minor thing, but it would be practical if earrings and piercings were in different subcategories.
10