It's about time for an out of this world GP - Space themed pack! 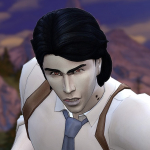 GracieO312 Posts: 524 Member
May 5 edited August 5 in The Sims 4 Ideas Corner
I really want a space themed expansion pack for the Sims 4 and I think there are a few simmers out there that share the same feelings as I do. It's not something that the Sims team has really touched upon much in the franchise and I think there is definitely room for improvement on this particular theme (looking at you GTW). With the popularity of franchises such as DC/Marvel and Stars Wars I think the devs should seriously consider this theme.

I'd really like to be able to build spaceship houses, an alien city/planet neighbourhood with improved apartment system (or just more apartments in general), possibly a new species of alien or upgraded robots (I really would love to see SimBorgs tbh). I wouldn't want time travel pack per se but I think more alien/different architecture styles would be really fun to play around with.

I'd love to know what you think. Please feel free to share pictures and ideas!

Also, I am aware this is a pretty controversial topic so please be nice