What Are Your Game Rules? 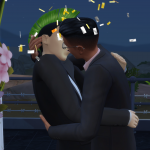 1. I play rotationally in a custom neighborhood that currently has 6 households. Rotations are 1 season long, after which I rotate to the next household, until I've gone through all 6.
2. Aspirations are based on zodiac signs. (I got this from PleasantSims.)
3. Sims can only marry other sims born in the same rotation/season as them. (I do this to avoid large age gaps.)
4. The amount of kids a sim has is based on their aspiration:
Family: 3 kids
Romance: 1 kid
Everything else: 2 kids
This keeps the population from getting too high or too low.
5. I play on a custom lifespan where 1 day = 1 year and pregnancy is only 18 hours. (Again, thanks to PleasantSims!)

I don't have any more yet, but feel free to share what rules you play with in your game, whether simple or complicated!
2