White
Sign In · Register
Home › The Sims Franchise Discussion
April 7 - We just released a patch Day for The Sims 4 on PC/MAC. Patch notes here.
April 3 - It's Friday! Find here this week's Friday Highlight
April 6 - A word from our team: coming soon to The Sims 4

Mental Health and The Sims - How has it helped you? 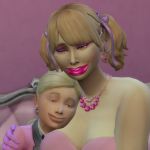 ChuChuExpress Posts: 1,690 Member
March 16 edited March 16 in The Sims Franchise Discussion
Mental Illness affects us all at some time during our lives, and it can be bought on by a multitude of reasons. There are various ways to help someone cope, and actually, playing the Sims can be one of those ways. Talking to others helps too. It's especially important to keep an eye on the mental wellbeing of ourselves, as well as others during these difficult times.

In a world where you can be anything, be kind - Caroline Flack


I've got ADHD and Dyspraxia. I'm also on the spectrum. The sims helps me to escape the reality of my special needs. It also reminds me that we're not perfect. In some tasks, we may struggle, but in others, we're pretty good at.

How has the Sims helped you with your Mental Health? Also opening this up to simmers with special needs.
Sims 4 Family: Benjamin, Wendy, Chloe, Shine, Tiffany, Roddy, Sophia and Hamish Furystrykar.
Be Kind Online and Stay Safe
6