Idea - how Sims would use desks for Blocking, or how to "edit" your sims' knits. 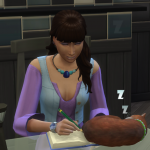 DaWaterRat Posts: 947 Member
March 4 in Community Stuff Pack Project 2
I've seen a lot of people answer @SimGuruConor 's question #3 about knitting and desks with "No. they should knit in a chair" And that's fine. That's actually where I stand on knitting itself

Many, though not all, knit projects should be blocked. For those who don't know, blocking is a technique to even out and straighten up the stitches in a project. It's not just for knitting. Many crochet, embroidery and cross stitch projects can also benefit from blocking. Usually this involves dampening the project, then arranging it on a towel and letting it dry flat.

Now, do all projects need to be blocked? No. Depending on the materials used and the nature of the project, the project may not need blocking, or may be able to get away without it. But for the purposes of a game, that's a level of complexity I'm willing to ignore.

So what I'd like to see is blocking used as a way to effectively "edit" your sims' knitting project.

When a Sim has finished their project, it will have a quality rating - Poor, Normal, Good, Excellent, Outstanding. You can then complete the project - making it into the actual craftable item - or if the quality is less than outstanding, you can block it.

Ideally, Blocking would be a 30 minute to 1 hour action in total, not including any needed travel time. The sim would go to a sink, use the washing dishes animation, but the dishes would be blue, or red, or some other color with a knit texture. They would then carry the project using the Laundry Bag/garbage bag asset to a desk or a table, but the bag would have a new texture to represent the towel the project is now wrapped in. They can put it anywhere you can put a computer. And you can direct them to a specific spot. There the would unroll the towel and fiddle with an asset that represented the finished item, then walk away for a little while. About an hour later, an action to go retrieve the item would cue up, and then the sim would put the project in their inventory, its quality improved by a step or two, and then the could select whatever interaction to complete the item.

How much of that is actually feasible within budget? I don't know. And as I said, I'd like other animations to take priority. But it would add some of the much requested "realism" to knitting.
1