White
Sign In · Register
Home › The Sims Franchise Discussion
April 7 - We just released a patch Day for The Sims 4 on PC/MAC. Patch notes here.
April 3 - It's Friday! Find here this week's Friday Highlight
April 6 - A word from our team: coming soon to The Sims 4

Should we have real fears back in The Sims? 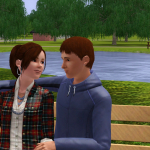 king_of_simcity7 Posts: 24,106 Member
February 22 in The Sims Franchise Discussion
I am talking proper fears. Not 'scared of being cheated on' but actual 'phobia' type fears.

I shall go first:

I am terrified of lofts especially if there is a water tank it it. I still think that a tank is a large monster waiting to eat me even at the age I am now.

Spiders do not bother me. I could hold a tarantula with no problem but going into a loft not matter how big or small then I have issues. It is not the darkness but the look of them. The wooden rafters, insulation, fiberglass on pipes and the noise of a water tank hissing away.
Something like this:

There seems to be no trigger. Our loft had no water tank and was not that big. Where my parents live now used to be my Grandparents house and the loft is in the eaves. An original water tank was in there and I can still remember the sound it made even though it has not been connected since 2006. I decided that I did not like lofts more than 20 years ago for some reason and stuck to that fear for some reason.

Now that is what I want in The Sims. I want Sims to fear something and then try to figure out why they fear it. I want them to shiver at the thought of facing their fears. That is what it should mean by 'deeper personalities' or whatever. I want a Sims game that causes the Sim so much fear that I fear the same as them as well.