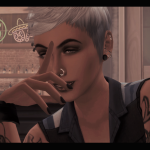 A series of events found teenage Athena tumbling into a world of fame and infamy, money and power, crime and magic.